Virginie Foloppe started out studying theatre arts at Sorbonne University in Paris, and at the INS AS in Belgium. As an actress, producer, and set designer, her considerable exposure to video sparked an intense interest in the medium, one which she has decided to explore. She pursued her qualification in Fine Art, and subsequently authored a doctoral thesis on visual arts, also at the Sorbonne. During her studies, she also taught Visual Arts & Aesthetics at the University of New Sorbonne.
A total artist, she features in all of her videos, which she sees as small works of fiction. Noticeably present in photographs & videos are dolls which she uses to express the pain & suffering of childhood (small dolls), and to represent adolescence & adulthood (big dolls). Like a painter, she also uses colour to impart feelings to her audience.
Since she started, Virginie Foloppe has created forty videos which have been successfully shown in several festivals & exhibitions.France 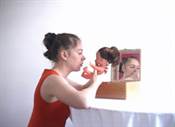 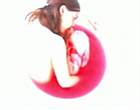