this animation explores the cult of death in catholic ideology as manifested in numerous images in churches and monasteries around lake constance - and the association of this cult with warfare, a link represented locally in the armaments industry at friedrichshafen.

this artwork is part of the participatory project flag metamorphoses, a growing series of flash animations by so far 20 international artists. 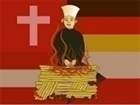 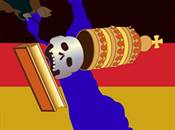 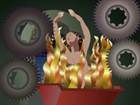