The participating movies form a short series of notes about water, made in the summer of 2004. The movies are made in a very simple style, mostly line and a lot of white space. Because I wanted to preserve the character of the note, they are drawn in a direct and concise way, with only a few lines.

My work consists of drawings as well as animations and I use 'classic' (paper and pencil) as well as digital techniques. Regardless of which techniques I use, I try to maintain a certain simplicity and bareness. I often work in cooperation with audio artist Gerd Westendorp, which started out as a series of audio-video performances. Lately the performance part has disappeared, in favour of a more intimate atmosphere, both in the process of creating and in showing, which we believed our work needed. We now make audio-video installations, in which his sound forms a sphere and interacts with my animations.

My website, on which I place a new sketch, animation, or drawing every few weeks, can be found at:
http://www.miek.org
Director
Miek Van Dongen
Length
10:00
Released
11 May 2006
Genre
>  Experimental
Country
>  Netherlands
Edition
>  2006 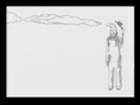