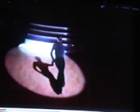 Who is Samuel Van Ransbeeck?
Samuel Van Ransbeeck is a Belgian composer, currently based in Portugal. At the moment he is enrolled in the course of composition as a Master student at ESMAE in Porto. His current professor of composition is Fernando Lapa. Next to Fernando Lapa, professors of composition include Dimitris Andrikopoulos and Filipe Vieira. In the field of electronic music, he was guided by Rui Dias, Gustavo Costa and Carlos Guedes.
In the last year different projects emerged like the Stockwatch software, a program that takes values of the stock exchange and translates them into music in real-time. He also worked with visual artists to make a videoclip for his electronic composition Um So and wrote the soundtrack for Dispersion, an experimental movie in collaboration with Polish sculptor Piotr Nowak. This year he will be involved in the creation of a ringtone project, a program that generates ringtones automatically.


Your film is about?
Um só was initially an electronic composition for the course of electronic music at esmae, porto, portugal. When i met camille entratice, a french-brazilian artist, who was doing her erasmus in porto, i asked her to collaborate with me to make a videoclip for my music. Camille took a dance clip of youtube and put some heavy editing on it, changing the succession of the movements in the original video and adding various light effects on it. The result is an atmospheric video that completes the muisc very good. A friend described the music as "music of encounters", where something happens and quickly disappears. The video tries to picture this, showing one dancer, then two dancers but always getting away from eachother as if it were a short encounter. The name in portugese "um só" means "one alone" and that is what the music and the video are about; somebody who wanders around and encounters many things, but in the end, stays alone.


How did you start with film? And do you have an educational background in art or film?
Um so was an electronic composition. Because I was always interested in making a videoclip, I took the opportunity that emerged with encountering Camille Entratice. I don’t have a background in film, I hope to expand my knowledge in the future.


Could you explain how you work, what themes or concepts and what is important to you?
The idea was to use a dance choreography. As the music represented a music of encounters, the use of a tango choreography was appropriate, as it shows the atraction and detraction of the persons.