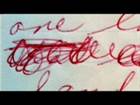 Who is Curt Anthony Bozif?
Curt Bozif is a young artist living and working Chicago, Illinois. I earned my BFA in Painting and Art History from the Kansas City Art Institute and my MFA from the department of Art Theory and Practice at Northwestern University.

Your film is about?
My father served a two-year stint as a U.S. Marine and survived a thirteen-month combat tour of Vietnam from 1968 to 1969. My knowledge of his experience in the war, through the stories that he told and the things he’d brought back with him have, since before I can remember, prompt an endless stream of questions and conjured in me all the dark fantasies that have become the objects of my brooding for years. But, despite all that, for 25 years, I’ve refused to ask my father one question. Then, in 2007, while reading for the first time through the over 300 letters that my father wrote to my mother while he was serving in Vietnam, as if hidden in the words of a stranger’s poem, frozen in time, I found my answer without having to ask for it.

How did you start with film? And do you have an educational background in art or film?
I started working in video in 2007, my first year in graduate school. I had just recently seen Chris Marker’s, Sans Soleil, for the first time. Before that I was making labor intensive process based drawings and sculptures. It wasn’t until I started focusing on my father and our relationship that I began seriously thinking about video. I found video attractive because of its natural capacity for story telling, documentary, and portraiture.

Could you explain how you work, what themes or concepts and what is important to you?
As a visual artist first and a video artist second, each video is conceived, composed, and constructed differently and each is specific to the context that it was born out of. As far as themes or concepts go, I’d say I’ve always been consumed by the fact that I am my father’s son.

Where do you get your ideas or influences from?
My ideas are generally born out of a gnawing yet inexplicable brooding. A brooding over my father’s past. A past that includes many things. Not the least of which is his having fought in Vietnam in the late 1960s and the possibility that he might have been killed in war, and in turn, the possibility of my own non-existence. It’s these possibilities, and cold indifference of the universe, that have been the object of my brooding for years. Why was it that he’d come back alive while so many others had not? How many close calls lay between my Being and the rice patties of Quang Nam province, how many converging forces had it taken, what was the probability, how was it that my existence was even made possible?

What is your next project about?
My next project that is the furthest along is a feature length quasi-documentary that will chronicle my father’s long overdue visit to an old friend. Together, my father and I will drive from our hometown of St. Louis, Missouri, to the rural mining town of Tunnelton, nestled in the Allegheny foothills of West Virginia. There, we’ll meet Danny Bolyard, or "Bogie." My father and Bolyard first met in 1968 while serving together in Vietnam with the 60mm mortars of Bravo Co., 1st Batalion/1st Marine Division. For a short time my father was a section leader and Bolyard was his radioman. They served together for about a year before my father rotated home in 1969. Of all the buddies my father had from back then Bolyard was his best. Our visit will mark the first time they’ve seen each other, and only the second time they’ve spoken, since Vietnam. After our visit, if there is any time, my father and I hope to make a stop in Washington D.C. To see the Vietnam Veterans Memorial before returning home.