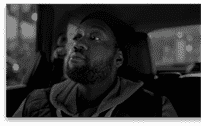 Who is Arthur Jeanroy?
I"m a french young director always looking for new challenges and powerful images. Based in Paris.

What is Tout dans la tête (meurtr"rap) about?
It is the official music video for the song "Tout dans la tête (Meurtr"rap)" by french artist Zoxea. It"s also my graduation work at the ENS Louis Lumiere and I presented it along with my thesis on the visual world of hip-hop.

How did you start with film? And do you have an educational background in art or film?
After studying business and economics and graduating with an MBA I decided to try to do what I always wanted and applied for a film schools. I got accepted at the ENS Louis Lumiere, a french public school which is specialized on training director of photography.

Could you explain how you work, what themes or concepts you use and what is important to you?
I like to start with a character. Once I know how he/she is, I create a world around him/her and see how they interact with each other.

How long do you usually work on one project?
It really depends. As I also edit my projects I can work on a music video for 3 to 5 weeks for instance.

Do you carefully plan the production process or do you work more intuitive?
I like to plan carefully to be able to improvise afterwards.

How does the title relate to the work, and how do you find a fitting title?
Usually I start with a title that is not supposed to be final one and then it naturally becomes the final one.

Where do you get your ideas or inspiration from?
I use Tumblr a lot, I watch a lot of videos and I"m a big fan of movies.

How important is sound in film, and if you use sounds, do you create your own or use existing?
Sounds is 50 percent of a film so it"s really important. I do not create my own but I work with people I trust.

How does content relate to the form of your work?
Both are intimately linked. I guess the final form is the result of a mix of my own universe and the one of the content.

What possibilities of the web are yet to be explored?
Tough question.

Did the web changed your view on art, or your career?
I started with the web so I hope I will grow with it.

Where would you place your work; cinema or art. And what is the difference between those according to you?
There is no real difference to me. Some films want to be "art", some are more about "entertainment". I like both, I like to make both and I like to mix art and entertainment.

How influential is the reaction to your film by the audience?
I try to learn from it. When it is a constructive reaction, positive or not, it"s always interesting.

What is your next project about?
I"m currently working on another music video and funny commercial for a website that sells underwear for men.
< overview