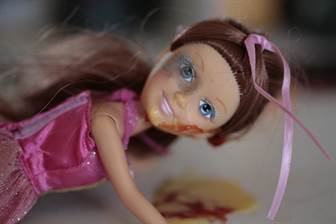 1:02, 2012, Fiction
This is a short stop motion video going uncover as what Barbie’s life could possibly be like if she lived in the real world. I wanted to find a source of childhood influences and what effect it has in adulthood. I chose Barbie because of her iconic image and the controversy that has become a part of her identity. Whilst being a bit tongue in cheek it also has a darker side to the \"perfect\" woman.
DirectorAllie LitherlandProducerAllie LitherlandWriterAllie LitherlandCameraHoward LitherlandEditorAllie LitherlandCountryUnited KingdomEdition2013 ScreeningsThe Cutting Room, Nottingham< overview

Who is Alison Joy Litherland?
Allie Litherland is a recent graduate from Nottingham Trent, gaining a Ba(hons) Fine Art. She is in search of the effect that dehibiltating emotions such as shame and fear have on our lives. Through research and studying CBT (Cognitive Behavioural Theapry) she is producing art work that is raw and honest to how to can jepodise our well-being through fear. Through the research she has gained she then applies it to her own life and then creates work around what she has found out to be truth. Her work varies from moving image to performance projection installtions which evoke such a thought-provoking peice mainly because nothing is fake, it all real emotion and a real search for the effects of negative emotions and how we as people can remedy or help.


What is Barbie about?
I wanted to create a work about Barbie because if I trace back to childhood for me was to remember the Barbie’s I had and if that had an ruling in my life now.
Even though as adults we grow out of our childish thoughts and hero’s (most of the time!) the effect of Barbie must of had an impact on some level. The perfect life that Barbie and Ken portray now is similar to what you see on TV, celebrities even neighbours. Everyone has the "perfect" life but to chase after perfectionism is a goal that no one will achieve because it doesn’t exist, it’s all relative. With this in mind I wanted to swap the two worlds over and see what could happen if Barbie and her life was real. Although this stop motion film is light-hearted to watch the content seems to conflict with the nature of the film. I really liked this juxtaposition. Some just thought it was funny others not so much but the decision is yours.


How did you start with film? And do you have an educational background in art or film?
I never touched film till the end of my Foundation Course, even then I was never taught how to make a good film but all my concepts were best portrayed through film. Then after attending university I gained skills in editing, lighting, filming but most of all how to construct a film that was based on emotion. I always let the concept build the medium, I never go into my work thinking what the end result will look like, as research and try and test different ideas the work becomes obvious what it needs to make it work and support the concept in the most effective way.


Could you explain how you work, what themes or concepts you use and what is important to you?
I work in a very particular way, I rarely use sketchbooks unless I need to build something.
I discover something that seems to be the key to my questions on why people do what they do.
I study and research into this subject and this leads me to something else and so on.
Then I will come to my conclusion, use myself as a test subject and examine my life and patterns to use this as the work.
My work is very psychological so I have to use myself because I need to know that it is truthful and candid. If I used somebody else, 1) I wouldn’t know if they were holding back 2) It seems hypocritical of me to be searching for these answers but not willing to use myself. My work has metamorphosed and inevitably the physical aspect of my work changes too. I was working with moving image, now it is performance with projection. No doubt I will use moving image once again, it depends on what the work calls for.


How long do you usually work on one project?
It varies but usually 3-4 months sometimes longer depending how many tangents I have from studying the subject. For example when I created Barbie it came from studying stereotypes, why we stereotype and where it first came from.


Do you carefully plan the production process or do you work more intuitive?
I like to plan as much as I can! Usually something will change and then it will have domino effect but it always works out better than I had intended. Working with technology I think you do need to be quite flexible because it may not work out the way you wanted in your head so you have to be able to adjust and problem solve a new way of working.


How does the title relate to the work, and how do you find a fitting title?
I wanted the title to be "movie like" Barbie is a famous character and the work is essentially about her, like an autobiography documentary and it seemed suiting that it was just her name.


Where do you get your ideas or inspiration from?
People with myself included. The work isn’t egotistical when I say I find myself an inspiration, I mean how I react or feel after a situation will make me think why did I respond that way. Then this will lead to researching. Equally if I hear stories on the news I wonder why that happened and what would of happened if it was handled differently, not knowing the answer myself I go find it, sometimes I succeed but sometimes I fail.


How important is sound in film, and if you use sounds, do you create your own or use existing?
Sound is to me a whole other subject that should be considered just as important as the footage. I mostly make my own soundtrack or none at all. What I usually do is use the sounds that were in place whilst filming, it seems more real that way. With Barbie however I thought having her own soundtrack was very important. I wanted the stop motion to be all about Barbie and her life behind closed doors, like I said before I wanted this "movie-like" feel or advertisement. So by using her first ever commercial (in 1959) the soundtrack felt right, also the lyrics were very similar to the film. The tune and melody of the song is very innocent and pretty but the lyrics were quite shocking I thought. For example " Someday, I’m going to be Exactly like you Till then I know just what I’ll do... Barbie, beautiful Barbie.I’ll make believe that I am you"


How does content relate to the form of your work?
It is difficult to work with emotion as a concept because it’s only the effects of emotion that you can really see. It’s even more difficult when the emotion you are working with is one where nobody seems to want to talk about, let alone share, such as shame and fear (which is why I use myself) The concept moulds the medium so the content related to the form of my work is all the way through. To use performance, projection and moving image I am relating that back to how emotion is a people connector, so that is why I choose performance for some of my work that needs it. Emotion can be manipulated through music, lighting etc so my pieces which were about influence through the media (like Barbie) I will use video because that is how Mattel and other companies choose to influence us. Others requires a presence of a person because then a relationship can be formed between the viewer and the audience more easily.


What possibilities of the web are yet to be explored?
To make viewing a video more engaging to view online, for example being able to see a video online that is 3D. I expect we aren’t that far away from being able to produce these things which will be amazing for video artist because it gives us another level to work with that we didn’t have before.


Did the web changed your view on art, or your career?
It made it more accessible! The web is a brilliant tool to find information or send information out. As a video artist the web is essential for getting my work seen.


Where would you place your work; cinema or art. And what is the difference between those according to you?
Definitely art! Often my work won’t have a narrative, Barbie does however that is to support the concept of perfectionism and the perfect life, and life does have a narrative. I would never have a narrative for the sake of it. The difference I think is cinema can have concepts or messages they want to put across and do successfully but there are also cinema works out there that don’t do this and are there just for entertainment, which is fine too.


How influential is the reaction to your film by the audience?
The reaction is very influential and the comments made are crucial for me to develop my practice and refine my ideas. Without this it would just be me and my thoughts which wouldn’t develop my thought process.