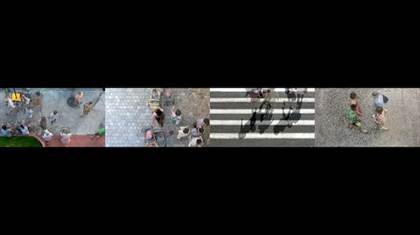 4:24, 2011, Video Art
Throughout Andrew Binkley’s work as an artist, he has utilized a variety of media and approaches to uncover and explore our notions of time and patterns of human behavior. In ‘Crossings’, Binkley brings into play the time-based media of video to observe the seen and unseen traces between people on the streets below.

’Crossings’ is composed of video shot from an overhead perspective in the same location during various periods of time. These multiple videos of people passing by on their daily routines are then layered together, merging in and out of each other. In capturing these fleeting encounters, ’Crossings’ works with the themes of intersecting or sharing paths, and integrating or transforming relationships, as well as the unknown or transient connections between people through time.
DirectorAndrew BinkleyProducerAndrew BinkleyCameraAndrew BinkleyEditorAndrew BinkleyComposerTaylor Deupree & Christopher WillitsCountryUSAEdition2013 ScreeningsUp the Wall, Chester Castle, organized by Chester Performs, Chester, UK, 2011