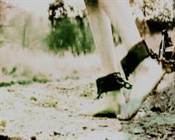 3:13, 2008, Experimental
English: "Just because You spit in my eyes does not mean that I have clear vision"

Who is Anders Weberg?
An artist and experimental filmmaker working in video, sound, new media and installations and is primarily concerned with identity.


How did you start with film? And do you have an educational background in art or film?
I have a very eclectic background. I’ve made a little bit over 400 productions including 100+ music videos and see that as my formal training.


Could you explain how you work, what themes or concepts and what is important to you?
The human body lies at the root of projects that formally and conceptually chart identity and its construction as a preamble to broaching matters of violence, genders, memory, loss or ideology in which personal experiences co-exists with references to popular culture, the media and consumerism. Specializing in digital technologies, I aim to mix genres and ways of expression to explore the potential of audio visual media.


Where do you get your ideas or influences from?
Living


How does the title relate to the work, and how do you find a fitting title?
This work is a part of series of work that I would like to describe as personal films.


How important is sound in film, and if you use sounds, do you create your own or use existing?
For me audio/video is equally important. I’ve played music since a teen in various constellations and make all the soundscapes, music myself. In some work I do collaborate with other sound artists but not for my personal films.


How do you finance your projects (by yourself, sponsors or subsidy)?
It varies.
I try to get out as much as possible and give presentations and lecture about my work and that’s a way to fund new work.


Nowadays everyone with the right equipment can create videoart, good, bad or ugly?
Excellent. The more opportunities for people to express themselves creatively the better. I rather see a artists work than the same artist with a gun in his hand.


What possibilities of the web are yet to be explored? Which dangers do you see ahead?
I do a lot of work where the net is a vital part.
Example ..


In what category would you place your work; cinema or art. And is there a difference between those?
Art cinema?
For me the difference is in which context it’s seen. Categories are not my thing.


How important is the reaction to your film by the audience?
Very .. People who state otherwise are not totally honest I think. We all just wanna be loved.


What is your next project about?
I’ve already started to work on the 10hour10minute10second and 10 frame long film I will release on October 10, 2010 within the P2P art project. Like the 9hour film I released on September 9 this year It will be filmed with a mobile phone.