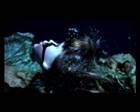 4:20, 2010, Video Art
This video is a journey through a dreamy dark landscape, the viewer encounters many dry leaves on the floor of its path, and regularly different objects appear catching the eye: a red bone, red fragments of a puzzle falling, a doll lying, fragments of a broken mirror shining and some toy horses standing at the side of the imaginary road.
There is a dance of red shoes cutting through the path, and a forest of dead vegetation being pushed away by the walker... in this dream we feel a strange danger, the dice rolling towards ourselves tells us that a game is going on, it is a journey to an unknown place, towards a feared void an experience of displacement and loss.

My film Cyanide has had a peculiar beginning. It originated from a period of my life of extreme depression, and uncertainty, and it was an action I was performing every day that made me think about developing the more predominant images of this film.

I was cycling in the winter through a path covered in dead leaves. I found myself going many times back and forwards along the same path: the leaves had fallen over it from the trees that grew at its right side, and there were so many of them arranged in a rather ordinate way. They cached my eye many times, they nearly became a fixation to me: the vision of these leaves coming towards me and passing by, as I drove away, became very important.

They surely must have had a meaning which I could not grasp, but they were also nice to look at, and shiny. I could not find an answer to many of the questions about my life at that time, and usually, when things get so hard, I tend to turn to images for a possible explanation, or an answer; it might sound silly, but things, objects, images, places can talk to you, even if they do not communicate through spoken language, neither they are rational or clear, even if they only give you a hint, or a confused indication, they can help you to put the events you are experiencing in a different perspective.

I do not know today the meaning of those leaves, but looking at them was enough to make me develop Cyanide.

Maybe Cyanide is about the world that’s being poisoned, but there is more to it. It is about acknowledging death: observing up to nausea everything you do not understand, or that bit that puzzles your mind. Many leaves on the footpath may mean a repeating pattern, a recurring event, the same signification over and over through a crazy journey. Once you have printed into your consciousness that particular shape you can start to remember about it in order to recognize it the next time it crosses your way. That is why the many leaves wouldn’t go away... Even if they are the supreme detached element, it is their image that would not really detach. A residual part of the dying thing had to stick to my head as departure and separation is always a painful experience. It is possible that the sticky image of whatever is “gone” is just an anchor, a secure place, for the stability of what stays close: that bit that cannot afford to go within the subject. There are no limits to what can go wrong, in fact in this video, as well as the many repeating patterns, occasionally other frightening elements appeared on my imaginary way: those red bones are reminiscent of previously consumed meals, crashed mirrors of impacts, and keys are the possibility of a way out. What is left within the self, together with all its impressions and images, is the way out to freedom. It is very hard to see freedom into such a dark and constrained scenery, with trashed particles, and that unbearable sense of claustrophobia, there is no clean rain here to clear dust from the mourning stage, and the rain is black and mean, in fact the last action does not suggest freedom at all, it rather looks more like a total eradication of the “walking being”, the viewer/author is pushed away together with the large amount of leaves, the search for a way out is only an imagined possibility here, only a hope behind the door...
DirectorBarbara AgresteProducerBarbara AgresteWriterBarbara AgresteCameraBarbara AgresteEditorBarbara AgresteCountryUnited KingdomEdition2010 BudgetLimited budget< overview