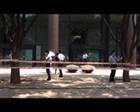 Channa Boon - Citymonkey - could you please scratch my feet

17:00, 2006, Documentary
Citymonkey
Three kids explore their own hardly ended school past in an abandoned school somewhere in Seoul, while the city around them keeps changing and expanding at a mayor scale and fast speed. While new building regulations take place and angry house-owners head for a confrontation with the authorities in the street, the three invent their own world and solutions to the tensions caused by the vast project developing that is going on in the city.

Could You please scratch my feet
On the images of an abandoned apartment complex and - house somewhere in Seoul, one hears the voices of a Korean couple who just moved house to a new flat. The couple is quarrelling over domestic
affairs and a sense of nostalgia comes in. Through the quarrelling it becomes clear the couple is longing for times their relationship was a happier one.
DirectorChanna BoonCountryNetherlandsEdition2006 < overview

Who are you?
I’m a Dutch visual artist, based in The Hague who became My usual occupations are: life performances in public space, (video)installations and painting. But not necessarily in that order. These are my first two short films.


Your work is about...
The film Citymonkey shows the metropole as if it were a huge sculpture, at which a genius or insane artist is constantly working, cutting pieces off, adding pieces to. Could you please scratch my feet? Is a spin off from the same idea, but then more claustrophobic, also in emotional/social sense.


Why filmmaking?
Very frequently it happens to me that an every day incident is the mediator for a filmic range of images that comes in my mind, and somethimes it’s strong enough to make the actual film.


Is film a big part of your life?
Yes, I cannot imagine my life without the principal of film in it.


New Media; a challenge for film makers?
I think new media are great and very handy to broaden the amount of people that make films, AND the possibilities that are created. But I see them just as mere tools, just like hammer and nails, canvas and brush. No SF, which, I think implies the term ’new media’ a bit. But maybe that’s my Dutch attitude...


Individual film making or co-operation?
My ideal situation would be: having a very small but very nice(=good) crew, same thing for the equipment, working on the film together, but making the final decisions as well as a lot of minor ones during the process (all the time).


Digital or classic?
I love film (8mm, 16 mm) but digital is more practical for irregular conditions.


Which one is more important to you, the camera or editing?
I think in camera movements, than I tell something while editing, so it’s not really separable.< overview