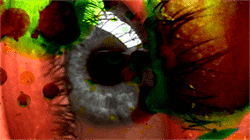 4:52, 2013, Experimental
Abstract experimental film ruminating on the body, cosmetic enhancement and physical perfection. By physically manipulating film and using materials that act as extensions of the body such as hair, a synthetic consciousness has been engineered as the materials begin to take on a life of their own. The search for perfection becomes an unachievable and endless loop twinned with degradation and disintegration.

Who is Emily Bailey?
I am a live visual artist and I work with 16mm film to create abstract animations that I digitally edit and remix for audiovisual performances and experimental short film collaborations.

What is Kurious about?
Kurious is a collaboration between myself and electronic producer Acra, who created the soundscape for the animation. The concept was to explore ideas of body image and cosmetic enhancement through the medium of cameraless animation on 16mm film. I approached this by using the film stock as a living material and testing its limits by experimenting with chemical reactions and by using bodily materials directly in the work (for example hair and thumbprints). I then worked with the soundscape to produce an open narrative about someone undergoing cosmetic therapy - it is very much a subjective viewpoint.

How did you start with film? And do you have an educational background in art or film?
My background is in Fine Art and specifically I studied sculpture at post graduate level. I used to produce video and sound installations and then moved into community filmmaking with young people. It was through this, I learnt how to work with film and this kick started my current practice working with 16mm film and digitising it to produce loops and footage I can use in my short film collaborations and for live shows where I mix my visuals live.

Could you explain how you work, what themes or concepts you use and what is important to you?
Music and sound is incredibly important to me. I normally make my visuals, working from a concept that I explore thoroughly through the filmmaking process. I then work with the soundscape or music and weave my visuals to it; interpreting tones, rhythm and harmonies present in the music and matching them with textures, patterns and forms found in my visuals.

The concepts and themes that run consistently through my work are:
- the microscopic
- the experience of the everyday as spectacular
- abstraction
- the human body

How long do you usually work on one project?
My work can be very time consuming. To produce my animations on film takes quite a few months. Typically when I’ve worked on short films, the process from animation on film to the final edit on digital takes between 3-5 months. I tend to work on film in batches and I use this output for other projects like live audiovisual shows where I am mixing my visuals live to music or spoken word performances. I recycle my content again and again and am constantly reworking it.

Do you carefully plan the production process or do you work more intuitive?
The filmmaking process for me is not traditional. If I am collaborating, I’ll discuss the concepts and ideas behind the project and then we’ll all go away separately to produce first drafts of soundscapes or visuals. Once both first drafts are completed it is a matter of going back and forth with different visual ideas, different edits and agreeing on how the final film will look. It becomes a matter of reworking it over and over until we are all happy.

How does the title relate to the work, and how do you find a fitting title?
In this case the title came from an idea Acra had and I think it works well as it fits the open exploration of the human body that the film reflects.

Where do you get your ideas or inspiration from?
My work sits somewhere between the visual music and handmade cinema of the early 20th century (influences include Len Lye and Norman McLauren) and the multimedia art installations and VJing culture of today (influences include The Light Surgeons and SDNA). I draw inspiration from these sources and also from my own personal experiences in everyday life.

How important is sound in film, and if you use sounds, do you create your own or use existing?
I rarely create my own sound or music in my film work although I do have a musical background. I normally collaborate with a musician or producer who will work on this element. I view the music or soundscape as being just as important as the visuals and concept or narrative.

Where would you place your work; cinema or art. And what is the difference between those according to you?
I would consider my work to be art but using the medium of film. I approach my use of film as an artist would approach a painting or sculpture and as I work in an area where I mentor and facilitate young people with filmmaking, I am very aware of how unconventional my process is when making a film.

What is your next project about?
I am trying to organise and pitch for funding for my next project. I am hoping to make a new piece on the concept of hypnagogia; the unique state of consciousness between wakefulness and sleep.