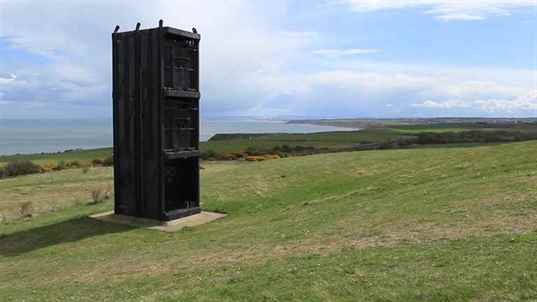 15:21, 2013, Video Art
Brass Suite explores the industrial heritage and cultural legacy of the mining communities within the Durham Coalfield through a series of short films. Shot on former colliery sites within the County’s historic boundaries and accompanied by the sound of the cultural continuum of traditional brass colliery band music, the films highlight and contrast the physical and cultural legacies of coal mining in County Durham.

The ever progressing and developing British society has reassigned, redeveloped and reused the landscapes in which the pits used to dominate, to match the ever changing economic agenda of the nation. The brass colliery band movement was born from and has now outlived the industry from whence it came, however the bands today maintain and keep alive the communal, politically willed ideals and traditions of the generations of miners who worked the earth underneath their band rooms. New retail parks and countryside walks have emerged, while other sites remain derelict, raising questions regarding what policy there is for how land is reused, and what needs to be set aside in terms of the preservation of the past’s legacy.

The soundtrack of Brass Suite has been chosen by each of the brass bands with whom the artist has collaborated, with recordings made in their band rehearsal rooms.
DirectorFintan DawsonProducerFintan DawsonWriterN/aCameraFintan DawsonEditorFintan DawsonCountryUnited KingdomEdition2013 ScreeningsDurham DLI Museum and Art Gallery July-Oct 2013< overview