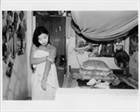 11:00, 2006, Documentary
This film is about how young men cannot have premarital sex and their only way to have sexual intercourse is with the prostitutes. And that the prostitutes looking for a way to bond and hope to have someone bails them out or to escape with.
DirectorHei Han KhiangEdition2006 < overview

Who are you?
Hei Han Khiang 1968 Chinese-Cambodian-American Living in New York City and travel to document social Political issues BA in Studio Art at University of Buffalo (SUNY Buffalo) Master of Fine Art (MFA) at UCLA Worked as a temporary employee and substitute teacher to earn money to travel and make art


Why filmmaking?
In the 1990s, someone I know in The New York Times told me that I should use video to do my travel projects My professor at UCLA, Paul McCarthy, told me to use video camera to make my projects. He told me this after he saw my photo projects. I always have an urge to make film but so stuck with still photo. On my trip in 1996, I decided to carry a video camera (video-8 and then Hi-8) on my trip to Southeast Asia. Since then, I always carried a video camera.


Your film is about...
I was first fascinated by people painted their face white. I set out to search for the reason and discovered that it is cultural identity crisis. People with darker skin wanted to look whiter and lighter skin like Caucasians wanted to have their skin darker. Almost all prostitutes in Cambodia and other Asian countries painted their face white to be beautiful and to create a façade. As I traced further, I found myself photographing prostitutes in a Cambodian run family brothel owned by gay pimps. After several years of revisiting, I decided to video the brothel. This film is about how young men cannot have premarital sex and their only way to have sexual intercourse is with the prostitutes. And that the prostitutes looking for a way to bond and hope to have someone bails them out or to escape with. Cambodian cultural does not allow showing of physical contact or affection in public. Due to this situation, HIV/AIDS has become an epidemic with over a quarter of a million people infected.


Financing your movie?
I financed myself by working as many job and spend money on a low budget.


New Media; a challenge for film makers?
The new media is the way to the future but it is also a crisis I think that the new media will broader audience but will not have the same quality as traditional filmmaking process or viewing. It is more economical to use new media to stretch the boundary


Do your films have style, just as some painters have?
I see my work as an experiment project from still documentary photography to video I like the idea of showing the video without the translation and let the audience to view this work as if they are walking into it I did not do in camera editing but I do try to have that aesthetic


Influences?
Peter Sellars, a director of opera, theatre and film, is renowned worldwide for his innovative treatments of classical material from western and non-western traditions, and for his commitment to exploring the role of the performing arts in contemporary society. “Once Were Warriors” (1995) Director by Lee Tamahori Book: “The end of Pverty” by Jeffrey Sachs


Individual film making or co-operation?
I hope to find people to collaborate in making future work together It is hard to work with people in a collaborative project but it is a good test and challenge to enrich my experiences


Did you ever have another ambition in life than to become a filmmaker?
When I was interview by a panel of trustee (from a UCLA Scholarship), I told them that I hope to go to Cambodia and make a film about Cambodia


Digital or classic?
I think it is not important to select a particular equipment. It is very important to have a very interesting suggest and the will to do it. As my professor at UCLA told me that if you can use video like you are drawing, then you got something made.


About my projects
My documentary photographic work is primarily concerned with contemporary social, cultural and political matters relating to Southeast Asia, how these societies continue to recover, change, and reinvent themselves following years of military conflict, and how this intersects with my own personal history and experiences. I see my photography work as evolving from my personal history through historical events and across cultures. My childhood was disrupted by the U.S. War in Southeast Asia and the political and cultural turmoil of the Khmer Rouge’s brutal re-ordering of Cambodian society.

My family, Chinese-Cambodians, became refugees, finally arriving in the United States in 1981. Until a few years ago, I was officially “stateless” and carried a United Nations refugee travel document. In 1989, in China as part of a student exchange program with Beijing Teacher’s College, I documented the Tian An Men Square uprising.

Witnessing and documenting the uprising made me more interested in the use of photography to convey important political, social, and cultural messages to people throughout the world. Since that time, I have made several trips to Southeast Asia to undertake documentary photography projects, usually staying for many months at a time and immersing myself in local communities.

In 1992-1993, I retraced my steps as a refugee in Cambodia. In the mid-1990s, I began a project documenting the impact of landmines both on the people and landscape in Cambodia, and photographed other aspects of Vietnamese, Cambodian and Laotian social, economic, and cultural recovery from the effects of war. Beginning in 1996, I began documenting the consequences of the American bombardment of the Ho Chi Minh Trail [between 1964 and 1973, an estimated two million tons of bombs were dropped). My Ho Chi Minh Trail work focused on how the geographically and culturally isolated Hill Tribe People (Montagnards), many of whom lived in the rural areas of Laos and Cambodia that were bombed, have re-used and re-appropriated the remnants of this bombardment – artillery shells, fuel tanks, etc. – that still litter this area.
The Hill Tribe People have found new roles for these war materials in their lives and communities – the very materials that once threatened their existence have been converted into useful everyday tools and objects – from boats and housing materials to garden planters and jewelry.

More recently, I have begun to examine how Southeast Asia is undergoing more change as more liberal economic policies are adopted, western tourism has increased, and the sex trade has spread in Cambodia and increasingly attracts people from outside the country. My photographs of the lives of young prostitutes show how this international sex trade is also a cottage industry run by families. < overview