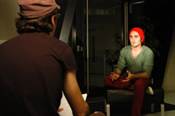 Ivan Orgaz - For a fistful of pounds

Within a group of reasonably honest people there is an unreasonably mean italian. The group tolerates Di Petti’s lack of generosity so they get on well after all.
Nonetheless, it’s a continuous temptation to torment him slightly, for instance, by offering him a lift in a black cab only to pretend not to have enough money to pay for the ride. however, Di Petti will invariably find a way out without compromising either himself or his money.

But one day his “guardian madonna” leaves him unattended and one of the group’s members recognises the opportunity immediately. Whilst having supper with Di Petti, he manages to borrow some money from the italian until the following day.