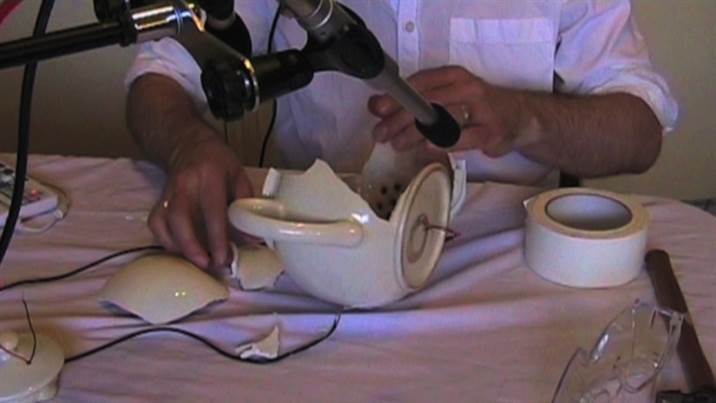 14:16, 2013, Experimental
‘Seamless’ is a compositional performance mediated through the
lens of two video cameras. An unidentified man sits at a table, he
sonically manipulates a teapot, smashes it - then reconstructs it
using Gaffer tape. Jump cut edited, what starts as aural
documentation evolves into an electroacoustic composition.
‘Seamless’ objectifies the faceless entertainer, dislocating the
event from its history.
With a nod to the oeuvre of Tommy Cooper, if Laurel and Hardy
were to have extended their ineptitude into the practice of musique
concrete, their 1932 short film ‘The Music Box’ may have been a
precursor to this.
The title ‘Seamless’ makes reference to kintsugi, the ancient
Japanese art of fixing pottery with lacquer resin seams, whilst also
winking ironically at the virtuoso dance music DJ in his / her
endeavour to make the transition from one record to another
imperceptible. Although the incitement by traditional ceramic
restoration methods is one of a more esoteric nature, this strategy
for a composition takes these notions and re-purposes them. Its
inspiration extends from Vaudeville to Metzger’s 1959 manifesto
‘Auto-Destructive Art’, from the unpredictable humour of Fluxus
concerts, to contemporary laptop electronica.
DirectorKevin LoganProducerKevin LoganCameraKevin LoganEditorKevin LoganCountryUnited KingdomEdition2013 Screenings18-19 September 2013
MOOZAK Festival. Fluc & Wanne, Vienna, Austria.