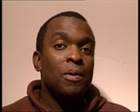 2:22, 2006, Video Art
Where do you think of when you say delicious? What is delicious differs per persons. What I think is delicious doesn't necessarily means that you like it as well. These people got the assignment to look into the camera for five seconds and to think of something that they think is nice. I hope that your phantasy will work when you see the facial expression or those people. Characterizations: Honest, humanely, art.
DirectorKim EngelenCountryNetherlandsEdition2006 < overview

Who is Kim Engelen?
I (32) studied art and now I work as an independent filmmaker in video art. Also I work/teach as head lecturer at the Film Making Program of SAE Rotterdam.


Why filmmaking?
It just came naturally. As a child I wanted to be a singer or an actress, but growing up I didn’t exactly knew what I wanted to study. After divers studies (i.e fashion, beauty specialist) and wandering I went to the academy of arts. There I developed my interest in video-art.


Your film is about...
The film is about…knowing and understanding your own choices. Not to adjust yourself to superficial pronunciations in general. And with this film I thought about the word delicious ‘lekker’. So what is good for me, to you, to us?


Financing your movie?
With this film I didn’t tried to get subsidy. I had to make this film anyhow, and I didn’t wanted much fuzz. I tried to get help from people who where interested in helping me for their own reasons so that I didn’t had to pay them. For example the actors from the Rotterdam’s Centrum for Theater. They wanted exposure and practice and I needed beautiful/interesting faces.


New Media; a challenge for film makers?
New media is already taking a flight. Because it is so easy and accessible a lot of inspired, creative and motivated people can develop and show their own stuff and that is nice. Renewing in the art is what drives the art. Images must adapt to new technical possibilities, changing modes in the art of telling a story, emotional trends, political ideas and so on. (quote: Mark Cousins in the world history of film). To my opinion all these new podia for exposing film is refreshing. The audience can choose what, when and where to see. For the filmmakers it also provides changes.


Do your films have style, just as some painters have?
The characterization of my video art is that I try to be honest and humanely. On the moment of production I leave space for the feel of the moment. I like to go on the streets and film. Unexpected things can occur and the ‘actors’ have to be alert on what is happening around them. In life we all have things happening to us (good/bad) and we deal with it somehow, I hope that people recognize something of their selves in my art video’s and that the video’s provide a kind of sensitivity and help somehow.


Influences?
I still like the work of Marina Abramovic. She always crosses her own boundaries in her film. I also follow the work of Pipilotti Rist. I think she is well aware of her roll as an female artist. They all seem strong woman to me, who are already a long time working with film. So they are my icons for video artists. In art I feel connection in the way to work as Jackson Pollock. I love the pictures of him working on the paintings. It is so full of energy. He controls the brush but for the rest he leaves it up to gravity and the paint. That is how I see life in general.


Individual film making or co-operation?
In my artwork I am a kind of allrounder, concept, planning, camera, editing usually I do it all. It is very important to me that I can do my own thing and that I don’t have to make concessions. But you always have to work WITH people anyhow and I like that. I can meet a lot of interesting people in my work.


Your plans and dreams...
My ambition is to be a well known video artist like Pipilotti Rist and Marina Abromovic. The more recognition the more freedom and exposure I think I will have. And of course a nice bank-balance won’t hurt to invest in my (art)films. I always want to continue to make art video’s and maybe I would like to make a feature film with pieces of video-art in it. But then with financing and distribution.


Did you ever have another ambition in life than to become a filmmaker?
No, I don’t think so.


Digital or classic?
Digital (Dvcam), because I work with my own equipment Sony 150P


All other remarks
If you want to make your own film and you need actors or extra’s. You can place a free add on www.figurantenwinkel.nl.
This is my initiative and the site is still in progress, but already you can find more then 1200 people in our database. < overview