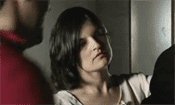 7:06, 2012, Experimental
Karen is a graduate of Boston University and Emerson College, where she earned a Master’s in film and video with a focus on directing for fictional narrative. Her films have been featured in festivals in New England, California, and South Carolina. Her short Junkstar was part of Alarm Clock Theatre’s production P.S. Page Me Later, a multimedia theater compilation based on pieces from Found Magazine, which won the 2006 Elliot Norton Award for Best Fringe Production. She is a longtime veteran and former Los Angeles city producer of the 48 Hour Film Project. Most recently, she has appeared in benefit performances of Eve Ensler’s A Memory, A Monologue, A Rant and A Prayer, and I.O. West Theatre’s True Story show. Karen is a copywriter, video producer, and project manager in higher education communications.

I appreciate the immediacy of the 48 Hour structure, which challenges filmmakers to utilize time and resources in creative and non-traditional ways. Improvisation training and participation in this competition have made me a better filmmaker. I strive to find the truth in each small moment, regardless of the resources I have at hand or the genre I’m attempting to capture.

Loris professional background spans visual design, theatre, and comedy. She has collaborated as a performer, designer, and writer on numerous short films, commercials, and stage productions. An original member of Bostons Improv Asylum, she helped create over 1400 improv/sketch comedy shows, corporate events, nationwide festival and touring productions. Her work as a scenic artist has been commissioned by clients including American Repertory Theatre, Saks Fifth Avenue, and The Rolling Stones. She currently designs and art directs for the Boston ad scene, and her voice-over work (as well as her design hand) can be found across the web, radio and tv. Lori also coproduces and performs in the improv/rock show LivePod Shuffle, which re-launches in March at the 2012 Women In Comedy Festival.

My foundation in collaborative, "immediate" theatre inspires both my commercial and personal work. Im drawn to where strategy, story and the audience experience intersect -- and how processes rooted in improvisation lead us to that meeting point. This background is also what stirs my interest in how we
e impacted by our visual surroundings, and the role of comedy in how we identify with each other and create community. Whether designing, performing, or writing, the concept of community has been a longtime focus for me. My work often revolves around ways in which tribes are formed, and our innate drive to stand out and fit in at the same time.

This silent film follows a boy exploring the boundaries of control and play, operating with as sole a purpose as his companions. Room 17 was created as part of the 48 Hour Film Project in Boston, 2006 -- requiring it to be fully written, cast, shot, edited, and scored within 48 hours (while using an assigned genre, prop, character, and line of dialogue). The selected for the Best of the 48 Hour Film Project series the year it was produced. It also screened as part of "48 To Life," a Boston showcase for 48 Hour Film teams comprised of improvisational actors and producers -- which features a live improv performance post-screening.
DirectorKaren Mae Black & Lori SalmeriProducerKaren Mae Black & Lori SalmeriCountryUSAEdition2012 < overview