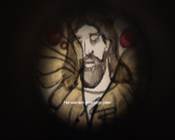 10:00, 2007, Animation
This work deals with the fact that every individual will interpret and often manipulate the information that he receives in his own unique way.
When i was in Brasil, i asked a few people to tell about a special recent occasion in their daily life. I recorded the stories and with my poor understanding of Portuguese i translated them into dutch. And i also manipulated them a little bit on purpose. And of these "new" stories i made short animation-like films. What you hear are the original voices of the Brazilians, the Dutch subtitles are my own interpretations.
There are four stories:
- eda tells about a very good priest;
- thiago tells about a bicycle race he won;
- fagner tells about being in a traffic jam in sao paulo;
- francisco tells about sleeping in a motel....
The technique is a combination of moving projections and animation.
DirectorLiesbeth VerhoevenWriterLiesbeth VerhoevenCameraLiesbeth VerhoevenEditorLiesbeth VerhoevenCountryNew ZealandSubtitlesDutchEdition2008 ScreeningsMijn op de heidelpenn (festival 2007)< overview