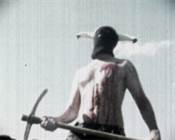 Who are La Cause?
La Cause is a videographer group born in Paris in 2004.
We are three people, Niels, Jacques and Frederic. We direct and stream short films, music videos, installations, Vjing and photographs.
We work aside in the advertisizing and commercials projects with our films production adgency.


Your film is about?
III speaks about the last big battle between a chief and a dark beast come from nowhere.


How did you start with film? And do you have an educational background in art or film?
We were all of us at the same university with the same desire of creation.
Unfortunately, lessons were boring and demotivating.
We decide to meet us under patronymic « la Cause ». We made our movies in self-educated person which was the best school.


Could you explain how you work, what themes or concepts and what is important to you?
Some movies are directed in group. We are a welded and supplementary group.
Make movies in crew allow us to gain in quality and efficiency.
Beside, everyone has his personal project with his own touch.

We like to divert the films genre and the rules with humor and radicality. We also like making some experimentations with the pictures and try some new things.


How does content relate to the form of your work?
In this movie, there is a reference to the old Russian silent film from the early century. The concept film was to divert this cinema rules (Intertitles, film stock, no spoken dialogue, classical music) and to transpose them into a delirious story.


How important is sound in film, and if you use sounds, do you create your own or use existing?
The music was made by a french compositor : Gerostenkorp.
All sounds were created by us.


How do you finance your projects (by yourself, sponsors or subsidy)?
One of the concept film was to shoot in super8. It was both an esthetical and genuine will to compare the coldness of the numerical support. We used 6 cartridge. Between cartridge, development, telecine, costumes, III has costed approximately 700€. Our bigger budget.
III was totaly finance by us.