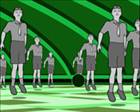 5:28, 2006, VJ
Alien-boyscouts are the protagonists in a bizarre and sometimes surrealistic world that can be visited by ‘users’
DirectorNils MühlenbruchEdition2006 < overview

Nils Mühlenbruch graduated as a sculptor in 1993 at the Rietveld Academie
In Amsterdam.
After the academy he founded the artist and exhibition space ‘VIDE CULTURA’ in Haarlem (now called Nieuwe Vide).
He made large, site specific installations and curated many exhibitions and festivals.
In 1994 he got a grant from The Netherlands Foundation for Visual Arts, Design and Architecture. His work could be seen in many exhibitions and art spaces in the Netherlands.
In 1996 he started to experiment with video and animation. Two other grants where given by the The Netherlands Foundation for Visual Arts, Design and Architecture. In 1999 he stopped working as a Curator to focus on his work even more. He started to work with FLASH and experimented with sound and visuals. In collaboration with Dutch composer and musician Joost Nelissen, he created an Animation/music act called MELVIN. In this act, Silent animation and live music where combined in a theatrical setting.

In that time he was also working as VJ DRIFTER in many clubs and festivals as a member of VJ group THE COMFORT OF STRANGERS.

In 2000 Nils Mühlenbruch launched his own internet TV-station called DRIFTER TV. (www.drifter.tv)
The site contains various interactive animations about the ‘DRIFTERS’
These Alien-boy scouts are the protagonists in a bizarre and sometimes surrealistic world that can be visited by ‘users’.
These users or visitors can manipulate the DRIFTERS and become involved in there whereabouts.
The next step he took from this point was collaborating with DJ DRIFTER
(who coincidentally shared the same name).
They called their collaboration DRIFTER TV LIVE, Animated Techno. DRIFTER TV LIVE played at many venues in the Netherlands and abroad and got signed up in 2004 by SUBMARINECHANNEL a multimedia production company in Amsterdam, to produce a DVD that has been released in April 2006 Nils Mühlenbruch also made a video clip for DRIFTER TV LIVE, that was played and broadcasted at many festivals and tv stations.
He also was nominated twice for THE ONEMINUTE AWARDS and won a TOMMY AWARD in the category best story, with a one minute version of the music video DRIFTERS FROM OUTERSPACE.
Nils Mühlenbruch is also the initiator and curator for the animation and newmedia festival STOP MOTION STARTSOUND, a three day’s event with lectures, screenings and vj-performances.
At this moment Nils Mühlenbruch is working on a new animation project called BITS AND PIECES, a collage of images based on found-footage video.
Nils Mühlenbruch is now touring with DRIFTER TV to promote the DVD in Holland and abroad. < overview