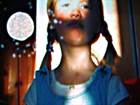 3:24, 2006, Experimental
Pangaea arises from a reflection on physical forces, machines and corporeality and Bateson's notion of seeking the patterns that connect Technical Statement: The animation for Pangaea was created on my home computer using consumer software and the sound was produced using analog synthesizer modules.
DirectorNicholas EconomosEdition2006 < overview

Who is Nicholas EconomosI am an artist and educator living in rural western New York state in the USA. The town of Alfred, N.Y. Is very small where I am a visiting professor with Alfred University and a previous resident of Brooklyn, NY. I have a Master of Fine Arts degree in contemporary sculpture but currently practice and teach interactive media, sound, video, and animation.

Why filmmaking?The desire to make art that brought together image, sound and time has been with me from the very beginning. Personal computers have finally made that affordable and possible.

Your film is about...I continue to pursue what it is that my work is "really about" and it is certainly linked to my life. I mistrust written language to be able to convey exactly what the work is, although I enjoy writing about the attempt. My videos are about the pictures, placing the pictures in their own time and further describing that time as a place with sound. There is usually some reflection on physical forces, machines and corporeality. I"m also currently drawn to aspects of Gregory Bateson"s notion of seeking patterns that connect.

Financing your movieI"m lucky to be teaching not only because I enjoy it, but the institution offers some resources in terms of access to computers and softwares. The money spent usually comes from my own pocket, supplemented with scant grants and a bit of commercial work. But the approach I have isn"t expensive in terms of the usual film budget woes.

New Media; a challenge for film makersI see computing as an extension of the same human desires that produced the printed word and radio and television. The current computer technologies make media very malleable and within the reach of a single person or small group to manage. If the internet remains somewhat neutral and open, it also allows for wide distribution and broadcast of ideas from many people. Unfortunately this position seems to be seriously challenged, but my hope is that it will continue. And yes, it is overrated and hyped but still interesting and potentially somewhat positive, hence the reason for my hopes.

Do your films have style, just as some painters have?My approach to video is very much related to the concerns of someone who paints. Actually there is more overlap with that approach to making pictures than traditional narrative Hollywood film making.

Influences?I can"t name a singular influence, there are far to many, and the list continues to grow as I meet new people, read more books, and experience more culture. To try to offer an answer, some historic early film influences include Melies, Vertov, Richter, the Whitney brothers, Painleve and many, many others.

Which film related websites do you frequent?This isn"t strictly film related but I spend a lot of time at http://www.rhizome.org and the links from works and articles there.

Individual film making or co-operation?I usually work alone and do everything myself.

Did you ever have another ambition in life than to become a filmmaker?I am an artist working with recordings and I find teaching to be meaningful for me to practice also, for many reasons. As an artist I have supported myself financially over the years with a variety jobs.

Digital or classic?I own or have access to both film and digital cameras and use both. Most of my work is digital now.

View other workI have recently exhibited at Art Interactive in Cambridge, MA, Hallwalls Contemporary Art Center in Buffalo, NY, Art in General in New York City, Fylkingen in Stockholm, Contemporary Arts Center in Cincinnati, SESI Gallery in Sao Paulo City, Window Project Space in Auckland, New Zealand, Visual Studies Workshop in Rochester, Chiangmai New Media Art Festival in Thailand, DigiFest DXNet in Toronto, and the Cyberarts Festival in Boston. I"ve been a frequent artist-in-residence at the Experimental Television Center in Owego, New York. You can find interactive work on the web in a number of places including Soundtoys.net and Rhizome.org. Awards include an Individual Artist Project Grant in Film, Media, and New Technology Production, from the New York State Council on the Arts. There is also a recent audio commentary in a biannual DVD magazine of new media art, ASPECT VII: "Personas & Personalities". I comment on Sachiko Hayashi"s video "Boop-opp-A-Doop".

All other remarksThank you for the interest in my work, the chance to share a little about it and allowing me to be part of the Streaming Festival. It"s a great idea to broadcast using the internet and I am looking forward to seeing everyone"s work.

SynopsisThis work reflects a life-long interest in the way things work and the systems that seem to make sense of them. My practice arises from a reflection on physical forces, machines and corporeality and Bateson"s notion of seeking the patterns that connect. I put myself in the position of being suspect of both magical thought and the authority of science while attempting to uncover something about the relationship of the named world and the real.

One Sentence: My practice arises from a reflection on physical forces, machines and corporeality and Bateson"s notion of seeking the patterns that connect Technical Statement: The animation for Pangaea was created on my home computer using consumer software and the sound was produced using analog synthesizer modules.

The images were created and assembled using Blender 3-D, Final Cut pro, Jitter, and AfterEffects. Some historic film influences include Melies, Vertov, Richter, Whitney, Painleve, and many others.< overview