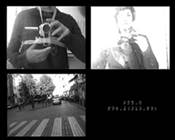 17:23, 2008, Video Art
Edited as a screen of camera controls, this project confronts images downloaded on the website youtube, filmed by the artist in public spaces, and captured on the internet game secondlife. the whole is fervently supported by the play of bach"s partitas in the harpsichord. video youtube, in low quality, shows electric shock treatments, some experiences of physically violent acts.
For capture film of people in public spaces, pascale uses a video camera hidden on herself. also, in opposite, she stages his avatar sleepwind dix in the solitude of the secondlife world.

Published as a directory by the american psychiatry association, the dsm was progressively imposed upon the psychiatric community as a model to be used by professionals in order to identify a person"s psychic syndromes in the establishment of a diagnosis.

In an approach of information and cultural training, "l"autre lieu" has invited various artists to reflect upon the dsm, its perspectives and the society that has initiated it.