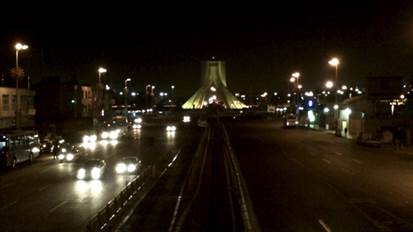 12:00, 2012, Video Art
Registered with a mobile phone camera in the spring of 2011, ’nocturne #2’ shows the central lanes and squares of Tehran, and its surrounding streets, at the most quiet and empty moment of the day. In recent history, the area around the infamous Azadi Tower (Freedom Tower) has been the backdrop of various protests, demonstrations, and violent repression. The Iranian Revolution of 1979 and the nationalistic and patriotic demonstrations during the following Iran-Iraq War, or the aftermath of the 2009 presidential elections are part of our collective memory.

At the same time, the so called Arabic Spring determined life in the Arabic world. Revolutions in these countries started after acts of resistance on the infamous local streets and squares. Just like the Iranian protests of 2009, the Arabic Spring got captured by citizens using their cell phones. The images subsequently got dispersed on the internet through social media, being the only visual sources of these events when international media were denied access by the totalitarian authorities.

The burdened locations of Tehran in ’nocturne #2’ are interchangeable with those of the Arabic countries, since they are just shown as a scenery, in fixed camera shots, with minimal activity and without sound. From the idea of the absent, the over-mediated images are disposed from their sensational content, their manipulative representation, and their historical referent even. What is left is an absurd and imminent anti-image, cultivating the aesthetics of the mobile phone image quality, and opening reflections on traditional media strategies.
DirectorPieter GeenenCountryBelgiumEdition2012 ScreeningsdokumentART European Festival for Documentaries, Neubrandenburg (DE) & Szczecin (PL), 2012
Aesthetica Short Film Festival, York (UK), 2012
Onion City Experimental Film and Video Festival, Chicago (US), 2012