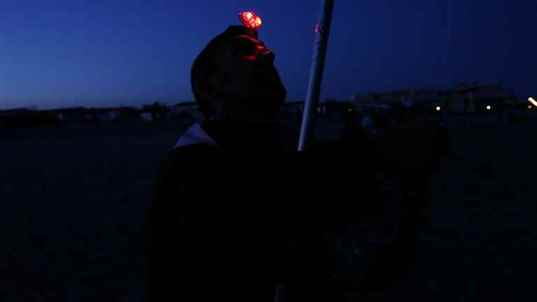 In the Miltonian "demi-monde" of night fishing, anglers on a French beach bait & cast their lines as the last sunbathers head for home. The camera follows their night-long toiling in obscurity during which only the objects they look at are visible in the beams from lamps attached to their foreheads. The brilliant light seems to dazzle and obscure as much as it illuminates, and an essentially ordinary activity takes on an otherworldly aspect, serving as an allegory for contemporary existence (and artistic production) via Biblical fishing-related allusions (many of the Apostles were fisherman, described as ‘‘Fishers of men’’ and the ancient symbol for Christ was a fish). Thus, on a symbolic level, in the film the fisherman/apostles conjure up a divine signifier (ie the fish) then dispose of it and are left to ‘‘cast around’’ for alternative significations.
DirectorSimon WelchProducerSimon WelchWriterSimon WelchCameraSimon WelchEditorSimon WelchCountryFranceSubtitlesNoneEdition2013 ScreeningsFat Out Fest, Video Jam screening, Islington Mill, Salford, UK, May 2014
Toride International Video Projection Contest, Toride City, Japan, March-May 2014
Streetlight: Video + Digital Media, exhibition, Roman Susan Gallery, Chicago, USA, February 2014
MIA, film screening, Amory Centre for the Arts, Pasadena, USA, 2013
Espacio Enter 2013 (Grand Canaries)

Who is Simon Welch?
I’m a British video artist based in France since 1994. I originally studied painting but now work exclusively in the single-channel video realm. My films are regularly screened in international film and video festivals and exhibitions.


What is Cast about?
"Cast" follows the activity of some night fishermen on a French beach, but for me the film functions as an allegory for the human condition in general and artistic production in particular. The anglers use a combination of specialist knowledge, predetermined techniques, established traditions and intuition to carry out their activity in relatively hostile natural conditions, but ultimately the results are subject to chance and they find themselves scrabbling around in the dark (as I did when shooting the film). The particular lighting conditions generated by the anglers’ forehead lamps recall religious paintings by artists such as Georges de La Tour, Caravaggio and Joseph Wright of Derby. The angling activity also lends itself to Biblical analogies given that some of the apostles were fishermen, described as "fishers of men", and the original symbol for Christ was a fish. My belief that religious ideas are essentially human constructs is therefore present in the film in the sense that the fishermen produce a "divine symbol" in the form of a fish but then dispose of it and are obliged to cast around for new signifiers. In art historical terms, I see this as analogous to the fact that the loss of religious signification in painting liberated art in many ways but placed artists in a difficult position with regard to constant innovation in terms of form and content.


How did you start with film? And do you have an educational background in art or film?
I attended a foundation art course at West Surrey College of Art and Design in Farnham (UK) where, among other things, I was introduced to video art by the American filmmaker Maureen Paley, although I didn’t pursue it further at that point. I then studied for a BA in Fine Art, specialising in painting, at Liverpool Polytechnic in the late 1980s and resumed my studies in the late ’90s at Strasbourg University where I did an MA and PhD in visual arts, including elements of cinema and video. In the meantime, I’d stopped painting and concentrated on installation pieces using video projection which eventually led me into the field of single-channel video production.


Could you explain how you work, what themes or concepts you use and what is important to you?
The approach I take to a particular film depends on the subject and shooting conditions involved, so each film is an independent entity which may or may not resemble my other films aesthetically speaking. At the same time, all my films present a particular personal vision of the world around me and a number of recurring themes and motifs are apparent. I guess I’d describe the attitude of the films as a kind of exuberant pessimism inspired by the relative absurdity of everyday life. The films are essentially non-narrative and increasingly refer to the relationship between animals and human beings. A number of my films also deal with the dichotomy between the rational and the supernatural, in which the supernatural may represent a political or historical issue or even relate to filmmaking and the nature of video itself. Similarly, I’m interested in the notion of the superimposition and interaction of different time periods and dimensions.


How long do you usually work on one project?
The length of a project depends on the subject and its accessibility and proximity. I finished postproduction on "Cast" about three months after shooting, although the actual time spent working on it was considerably less than that. On the other hand, the project I’m currently working on has taken two years and still isn’t finished, partly because it involves shooting in different parts of France and I’ve had to find the time and resources to accomplish this.


Do you carefully plan the production process or do you work more intuitive?
The production process is usually a combination of planning and intuition although for "Cast" little planning was possible as the film was shot in a single night in difficult conditions while trying to follow the unpredictable actions of the anglers.


How does the title relate to the work, and how do you find a fitting title?
In the case of "Cast", the title is a fishing term that has other connotations. While shooting the film I had a number of literary associations in mind, especially John Milton’s descriptions of the rebel angels cast out of heaven into the abyss and Adam and Eve cast out of paradise, which seemed to me to correspond to the visual particularities of the situation I was filming. There is also the cinematic association of being cast (or casting oneself) in a particular role and acting accordingly.


Where do you get your ideas or inspiration from?
My ideas are mostly inspired by chance encounters or by noticing a particular phenomenon which triggers a process of association with philosophical, political or cultural concepts.


How important is sound in film, and if you use sounds, do you create your own or use existing?
A film’s soundtrack is an essential element of the work as a whole. I usually incorporate sound, mostly ambient sound. On some rare occasions I’ve used music, but it has to be for a very good reason. The soundtrack for "Cast" was edited to eliminate all dialogue, leaving only the sound of the sea. The continuous ebb and flow of the waves reinforces the notion of repetition in the activity portrayed and conjures up the endless flow of time and the power of natural forces. The sea is invisible when the light fades but remains a sonorous presence off-camera, reminding us that it is the cause of all the activity onscreen.


How does content relate to the form of your work?
In my work I consider form and content to be inseparable in that they are mutually determinant. In "Cast", for example, the lighting conditions are the basis of both the manner of filming and editing and the conceptual content and symbolism, to the extent that it’s hard to imagine the film being shot any other way.


What possibilities of the web are yet to be explored?
The web is in the process of transforming how we live, how we perceive the world, how we produce art and determine what art is. And it’s just the beginning...


Did the web changed your view on art, or your career?
The web has changed the way I research my films and the way in which they are distributed and exhibited.


How influential is the reaction to your film by the audience?
I rarely get to attend screenings of my work as they occur in different parts of the world, so I haven’t had much contact with audiences. However, like most filmmakers, I try to imagine how a viewer might perceive a film in order to make it more effective. On the other hand, unlike commercial film directors, I don’t have to worry about pleasing audiences so I’m free to do whatever I want.


What is your next project about?
I’m currently working on a project that’s been underway for two years and which I hope to finalise in early 2014. The film’s called "Focus" and it’s about a retired miner living in the south of France who claims to have been the focus of poltergeist activity since the age of fourteen.