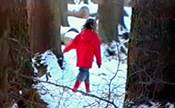 7:00, 2002, Video Art
In "Die Krähe" (the crow), Sonja Wyss lets a number of elements interact with each other. Images of a screaming girl, black crows against a blue sky, and a snow-covered woodland landscape are edited together in slow-motion. With this sequence of images, fragments of the song of the same name (Die Krähe), from Schubert‘s Winterreise, can be heard. This music reinforces the heavily fraught tone of doom and desire, the more so because the sound has been manipulated and creaks and falters, as if the needle has got stuck on the record.

The atmosphere on this video is one of vagueness; suggestions of innocence, violence, love and death, intermingle and are played off against each other. These are the snippets of a possible story, but there is no beginning and no end. It is as if we are in the girl‘s own world, where the laws of language and logic do not apply, but where, as in a dream, images and feelings mix freely with each other. What she really feels is not defined, and ultimately remains a secret.
DirectorSonja WyssCountryNetherlandsEdition2008 < overview