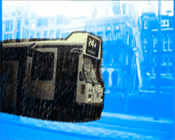 6:00, 2010, Documentary
An Australian narrator reflects on a year spent living in Amsterdam. An essay style film shot in Super 8 and digitally animated in After Effects, Buiten is a story about being an outsider looking into one of the worlds great citites.
DirectorWilliam HeadCountryAustraliaEdition2011 < overview

Who is William Head?
I am a non-fiction director of film, video and transmedia based in Melbourne, Australia. I am also a producer and curator for the short documentary channel and screening program www.dontyouhavedocs.com After a 10 year career in graphic communications I went to study documentary filmmaking at the film school here in Melbourne - the Victorian College of the Arts. Whilst there a received a number of awards and scholarships for my graduation film Night Fare - an observational film and transmedia project about Melbourne’s Indian taxi drivers (www.nightfare.com.au). In 2010 I was selected for the F4 festival for emerging filmmakers at the Australian International Documentary Conference and also received the national award for best Tertiary Documentary at the Australian Teachers of Media Awards.


What is your film about?
On the surface Buiten is a simple telling of one foreign person’s observations of living in Amsterdam coupled with somewhat random scenes from around that city. But what I think it is really about is the process of discovery, intrusion, reflection and ultimately our inability to capture the essence of place and culture. It is about one person’s vision retold, re-framed and re-coloured to the point where, upon reflection, our life experiences must be regarded as imaginary.


How did you start with film? And do you have an educational background in art or film?
I had experimented with super 8 and video for years but never really made anything I would call a finished film. So whilst living in Amsterdam I decided to make a more polished piece. After making Buiten and returning to Australia, I decided to return to university to study documentary film direction. Previous to this, I have also completed degrees in Media Studies and a masters degree in Political Economy - both of which are very influential upon the work I am now pursuing.


Could you explain how you work, what themes or concepts and what is important to you?
I am very interested in cities and observing the nuances of the cultures that inhabit them. My recent films are without dialogue and are quite simply observed tableauxs of people doing regular things. I’m interested in how the small and unnoticed actions of individuals reflect the causal relationships being enacted upon us all through wider economic and social forces.

For Buiten in particular, I started with wanting to film something that was a modern day response to Joris Ivens 1929 short film about Amsterdam Regen (Rain). I love this film, and many other City Symphony films from that period, and really wanted to make something that I felt was in dialogue with this work. I am also a fan of Patrick Keiller’s films. I like the idea seemingly implicit in films like London or Robinson in Space, that at the moment we point a camera and press record that the real world is necessarily fictionalised by its entombment in a frame. This is even more so now - in the days of Photoshop and After Effects. Hence my use of hyper-colour, re-framing, and scribble in Buiten to highlight this effect. I also stole Keiller’s title treatment and then coloured it orange - which seemed an appropriate gesture to infer the inclusion of Dutch patriotism into this fictionalisation thesis.


How long do you usually work on one project?
From concept to finished product I’m averaging about 1 film a year. Buiten took longer. It was a year to shoot and another year to do the post work. I guess your first film will always take longer.


Where do you get your ideas or inspiration from?
Not sure. They might come from hearing a story, seeing a picture, noticing something strange or just thinking about the world around me and my place in it. I guess that’s not very insightful but the truth is that I don’t really know. They just seem to come to me. Actually making the time to write about or go for a walk to think about something often is the best way to derive new ideas or re-formulate old ones.


How does the title relate to the work, and how do you find a fitting title?
I try to give my titles some kind of double or layered meaning to help read the films in multiple ways. Buiten - meaning outside in dutch - has a literal meaning which is that everything in the film was shot outside. It is literally the outside spaces of Amsterdam. Further than that it is meant to infer that the narrator is outside the culture he is observing and beyond that that we the audience are outside the mind and experiences of the narrator. Everything about the film is intended to be one step removed from the other - one step outside.

As far as finding titles go - they can be hard. Writing word lists and wordplay with my girlfriend over a bottle of wine is usually the best place to start.


How does content relate to the form of your work?
I feel that any claim documentary has to an honest relationship with the real world is spurious at best. Therefore I try to find a filmic form that on one hand expresses the non-fiction character of my work but on the other tries to make the processes of structure and authorial interference obvious. At the moment I am exploring the balances between a Direct Cinema style of observationalism juxtaposed with artefacts that expose formal conventions in abrupt ways. In Buiten this is manifest by re-animating the original footage. In other films I have been experimenting with elements such as jump cuts, gaudy titles, extra-diegetic music and direct looks to camera to achieve this.


What possibilities of the web are yet to be explored?
Augmented reality. I think there is about to be an explosion of stories and concepts told about the world around us that harness the power of the internet to re-orient us to our physical surrounds. I would love to do some work in this area.


Did the web changed your view on art, or your career?
Yes. Hypertextuality has changed the way I view story. I think that the internet has allowed ideas and narratives to play out in contextual ways rather than in a linear fashion. I think this is a huge shift in thinking from traditional top-down ways of thinking. One just needs to look at the remixes, mash-ups and comedic re-interpretations of older forms of media that now abound on You Tube to know that the author/audience relationship is one that is now multifaceted.

It also means that I can create different types of media for different contexts. For example, my film Night Fare is a short observational piece without words or strong narrative structure - it is made for a cinema context. However the website www.nightfare.com.au is about the same subject but includes talking head interviews, maps, written stories and information. So the website includes all the traditional stuff you might find in a regular TV documentary while the film itself is more of creative exploration of time, place and culture. The transmedia nature of the web allows me to create different responses to a subject in different contexts.

Its ability to foster connections is also astounding. I doubt if I would be in conversation with you or any of your audience if it weren’t for the internet. I know Buiten has been screened thousands of times through various channels over the internet but in the offline world the film has been screened to perhaps only a couple hundred. This ability to connect and find a wider audience - who, in turn, can watch my film whenever it pleases them - is phenomenal.


Does your work often circle the festival circuits, and do you visit festivals regularly?
The Melbourne International Film Festival is like an annual holiday for me in my own city - I love it. Actually, there seems to be hundreds of different festivals in Melbourne and so there is always one to be a part of in some manner. But apart from that, I live a long way away from the rest of the world and so getting to festivals outside Melbourne is difficult. I would love to go to more.

Unfortunately not many of my films have travelled to festivals outside Australia. I’m not sure why that is, but I wonder if it has something to with the fact that I’m generally interested in the patterns and movements of everyday people. Perhaps this aspect is of little concern to northern hemisphere programmers who might be more interested in films that present Australia in an exotic, far-away light rather than as a kind of curious, colonial reflection of their own culture.


How do you finance your projects?
So far each film has been different. Buiten was totally self funded. My university films received scholarships and my most recent film, We Are Illuminated, was mostly funded through a partnership program of the national funding body here - Screen Australia - and a local media access institution called Open Channel. In general funding options for emerging filmmakers is pretty woeful here in Australia so I’m not really sure where the funding for the next project is likely to come from. I tried crowd-sourced funding through the internet to help with post-production funds on my last film which certainly helped but wouldn’t be enough to fund an entire project.


What are you working on now?
Having just finished a new film, I’m still in that idea stage for new projects so am unsure exactly what is going to be next. I find the process of finding new projects is a matter of throwing up a whole bunch of ideas, letting them sit with you for a while, telling people about them to garner reactions and then just see which ones stick and which ones fall away. At the moment I’m still in the throwing stage but I’ve got ideas for a film about a sky-scrapper building, a 3D dance film, an augmented reality history project, an interactive music documentation project and a Facebook game. I’ll just play around with these for a while and see which one presents itself as the project most in need of making. In the meantime organising and curating the Don’t You Have Docs? Mubi Garage channel and screening program is taking up much of my time - I encourage to go check out the films here http://mubi.com/garage/projects/17
< overview