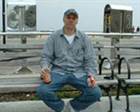 2:00, 2006, Experimental
History about oppositions in a life and the nature.

Who is Yuriy Lonkov?
To me 44 years. Education: the artist-designer’s and director’s (not finished). Studied in Moldova and Russia. Since 1986 when there is a free time, I did author’s мини films. Early on I did a film of 16 mm., last time I used on video. Up to disorder of the USSR worked on Moldavian TV; аs the operator, аs the director. And then became an independent director. After 1991 (the end of the USSR), I worked on various works (not on специльности). Unfortunately, money today defines - all... Since 1995 I live in the USA the big city of New York, but in a silent modest neighbourhood in Brooklyn. I earn my wages on care of patients, and in my leisure time I make small video films.


Why film making?
The cinema is for me a way to express myself as an artist and to share ideas.


What is Nail about?
"Nail" is a film about with what we collide every day, but in them the metaphorical sense and the author’s attitude to world around is incorporated.


How did you finance Nails?
All projects I do on my own means. One of my films, autobiographical documentary history about itself "Hospital attendant", has received the main prize at "1 Festival of the valid cinema" in Moscow (2005).


New media; a challenge for filmmakers?
Development of mass-media, the Internet and TV develops today very quickly and not all have time to capture the knowledge, but owing to these industries, people have a good and fast opportunity of contacts and rapprochements. In occasion of shooting as, I do not have opportunity to mount the films, I try to remove монтажно. Style of video of works, defines my material and physical opportunities. On a video camera as I make scoring... Not solidly? But it is convenient and mobile.


What are your plans and dreams?
Plans in the future to continue to shoot a film short video and there is an idea to remove the big documentary film about Russian New York. However, in any special new style, a fresh sight.


Other remarks
And the main thing, to you huge gratitude for your important and necessary technically-creative work on rapprochement of creative people from different the countries!!! Special thanks for selection of my films on your festival!!! Yours faithfully, Yuriy Lonkov !!! Brooklyn. Ny. 04.21.06.
< overview